Currently, the tallest building in the world mostly made of wood is the Brock Commons Tallwood House, an 18-store student building, opened last year by the University of British Columbia in Vancouver, Canada, which measures 53 meters high. However, Sumotori Forestry intends to beat this record with its project and wants to launch the construction of the highest wooden skyscraper ever erected. Located in the heart of the capital Tokyo, it will culminate at 350 meters and should be completed in 2041.

Sumitomo is one of Japan’s largest conglomerates and it extends its ramifications in the field of wood exploitation. This giant has decided to celebrate its 350th birthday, falling in 2041, by building the world’s tallest wooden skyscraper. The 350-meter high building in Tokyo will have 70 floors of offices, shops, and homes, with a rooftop garden. Its 90% wood-to-metal bracing architecture will be designed to withstand the strong winds and earthquakes as Japan is regularly exposed to. 185,000 m3 of wood will be needed to carry out this project named W350 Project. Wood is a material widely used in the past in Japan because of its abundance and flexibility properties, which gave buildings good resistance to earthquakes. But the second world war and the terrible fires caused by the bombings led the country to frame drastically the use of wood in buildings (buildings must not exceed more than two floors). However, the times are changing and the technical progress on composite woods opens new possibilities. The new national stadium currently under construction in the center of Tokyo for the 2020 Olympic Games uses wood. 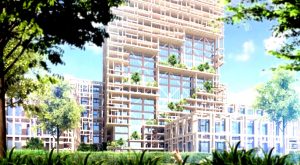 Several aspects of the construction of the building have already been completed: the W350 building will contain 90% wood. The rest will include metal since the braced structure will include steel elements that will dampen vibrations. These will be positioned inside the posts and beams. X spacers will be inserted between these beams and posts to prevent any deformation of the building under the effect of lateral forces. An element that is important in a region of the world where typhoons are frequent and earthquakes almost daily.

A special feature of this building: balconies will be built around the perimeter to provide residents with outdoor spaces like hanging gardens. For the promoters buildings of this type will be a source of well-being for their occupants but also for the surrounding buildings, thanks to the biodiversity that they will promote. Sumitomo Forestry’s interior design, made entirely of wood, will be designed by Nikken Sekkei Ltd. Wood will bring “calm, warmth and sweetness”. Another innovation is the reuse of the wood. Wood elements will be dismantled for replacement for a second or third use somewhere else as softwood or transformed wood.